A Visit With Eugene Tower 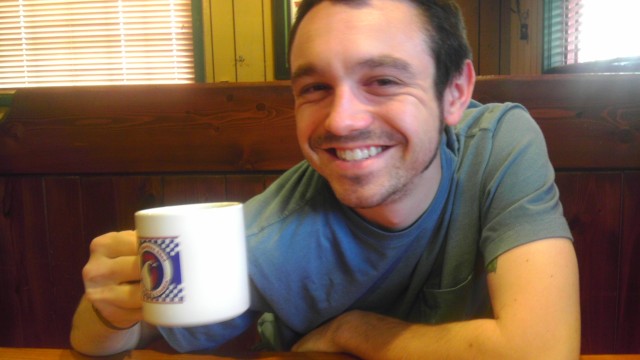 Today we’re off to Nevada, USA to chat with young Eugene Tower. A Systems Administrator who writes fiction and narrative nonfiction, his interests run to horror, science fiction and fantasy. He and his wife live in the Nevada desert he describes as a “barren wasteland”. I’ve read some of his work at his blog, Eugene Tower, and found it very, very enjoyable. He knows how to turn a phrase and spin a yarn!

Here are a few words from his bio:

“Eugene Tower is an American author who hasn’t been writing long enough yet to actually ever get paid.

He’s written a handful of short stories and a novel, all of which are still being revised prior to seeing the light of day. His writing views society through the lenses of Horror and Science Fiction.”

Now, without further ado, let’s hear what young Mr Tower has to say for himself.

Jim: Can you tell us a little about yourself?

Tower: I’m 26 years old, I live in Nevada’s Great Basin Desert with my wife and her three cats.

Jim: What do you do when you aren’t writing?

Jim: Do you have a day job?

Tower: I do. I’m a systems administrator at a large regional hospital.

Jim: When did you start writing, and when did you finish your first book?

Tower: I’ve been telling stories for literally my entire life; I drew picture books about space heroes when I could barely talk. I wrote stories off and on throughout my formative years, then started taking it more and more seriously as I got older. Sometime last year my wife decided she wanted to go back to school to follow her dream of being a fashion designer, so I decided I would follow my dream too and become a writer.

My first book is far from finished, but I did finish the first draft of the manuscript at the end of May. Its 330 page long.

Jim: From where do the ideas for your stories come?

Tower: All over the place. One time I got an idea for a short story from a strange-looking salad fork at a restaurant in Illinois, a few hours outside of Chicago. That story’s first draft is done, it’s 27 pages long, I think, and I repeatedly scared myself while writing it. Is that a good sign for a sci-fi horror story? I hope so.

Jim: Do you ever experience writer’s block?

Tower: Sure, there are days when the words just won’t come. I can feel them rattling around in there, bits of prose or images or scenes or dialogue I’d thought of and filed away throughout the previous day, but I can’t seem to get them to come out right, like they’re getting lost in the translation between my brain and my fingers.

Most days I’m OK though.

Jim: Do you outline or write “by the seat of your pants”?

Tower: I do a little bit of both. I make stuff up as I go for the beginning of everything just to get the characters and their motivations buttoned down, then I think “what is this story actually about?” and I draw out a (very) rough outline consisting of scenes and what will happen in each one. I do that until I can’t think of what should happen next, then I start writing where I left off, once again making it up as I go. I try to stick to the outline, but if things don’t work out that way I don’t worry, I let the story emerge organically as it will.

Jim: What author or book influenced you most in your writing?

Jim: What challenges did you face in getting your book published?

Tower: None yet, we’re still in the drafting process on the novel. Writing the damn thing sure took a long time, though.

Jim: If you had to go back and do it again, is there any aspect of your novel or getting it published you’d do differently?

Tower: Not yet, I’ll let you know this time next year.

Jim: How do you market your work? What works best for you?

Tower: I’m still testing the waters on different fronts. Twitter is fun, though. I have a Facebook but I can’t figure out how to do anything on it.

Jim: What was your favorite part of this story to write?

Tower: In the novel there’s a scene where there’s seven (I think – it’s been a while so I can’t remember for sure) characters standing around a hole in the ground. They’re construction workers taking their lunch break. I knew starting the scene that at least one of them would die in the end, because there’s a monster in the hole, but I had no idea which one or ones it would be.

I gave each person a name and one personality trait to begin with. I allowed the scene to progress naturally, and I found that each character had an important relationship with another character. Naturally, when the shit hit the fan in the scene, the characters who weren’t in trouble saved the ones they cared about who were in trouble. Three people helped three other people out of the hole, and a fourth one was remaining. I felt terrible, because I knew that guy in the hole and I cared about him, but he was the least important to the folks there so he ended up getting eaten.

It was magical. That’s what writing is all about for me.

Jim: Do your characters lead you on merry chases, creating new plots or do you have to pull it out of them?

Tower: Each character is a person for me, each one has a personality that shapes their actions and their reactions, and that shapes the plot. I’m pretty new to this “writing” thing, so I’m still fascinated by that.

Jim: What’s the most amusing thing that happened during the writing of this book?

Tower: There’s a scene I wrote about a lazy video rental store employee named Keev (short for Kevin) that I loved. Keev was such a dirtbag, he worked so hard at being lazy. He kept me laughing the whole time I had with him.

Like I said earlier, this is all just from the first draft. I hope all this stuff I liked lasts through the revision process.

Jim: Why this story? What was your inspiration?

Tower: It’s a story about an old Eastern European vampire who doesn’t like the way his kind is viewed in today’s popular culture. He decides to put the fear of the dark back into mortals’ hearts. The idea actually came from a dream, of all things, followed by a discussion with my wife. I took that and ran with it, ended up writing a novel.

Jim: Tell us about your writing environment. Is it messy or neat? Is there a cat on the desk or a dog at your feet? Do you use pen and paper, laptop?

Tower: Typically I write in my home office with the window shades drawn and the door closed. The room isn’t necessarily messy or neat, but there are stacks of paper all about. I write on an HP Folio 13 laptop that I bought from a nice man on eBay, but I write all my ideas and outlines on yellow legal pads with a blue pen. I drink coffee out of a great big white mug with a ghost on it. I feel the ghost is somehow symbolic of something but I can’t put my finger on it.

Jim:  What about your process? Do you produce consistent daily or weekly word counts or do the words rush out all at once and leave you with a dry spell?

Jim: What project are you working on now?

Tower: I’m currently working on a novella about a psychic detective with a half-robot brain who rediscovers his humanity.

Tower: One time I sent a story to a friend and he said he forgot I had written it and it reminded him of Neil Gaiman.

Jim: Do you have any advice for aspiring writers?

Tower: Read as much as you can. Write every day. If you’re having trouble with the words, just force it and your mind will eventually lubricate itself and it will get easier. If you’re getting mixed up with what you’re trying to say, just say it in the simplest possible way and carry on, you can take care of any issues in subsequent drafts.

Revision is important, but don’t over revise, don’t cut all the heart and soul from your story.

When you get feedback don’t get too caught up in what people are saying. If someone suggests a change that you don’t like, DON’T DO IT. Kurt Vonnegut said it best: “Write to please just one person. If you open a window and make love to the world, so to speak, your story will get pneumonia.”

Most important of all, of course, is don’t give up and don’t stop writing.

Jim: Is there anything you would like to say to your readers and fans?

Tower: Hi, I’m Eugene Tower! Thanks for your time today!

You can find Eugene on the web at Twitter or at his blog, Eugene Tower.

Thank you so much for coming to be with us today, Eugene. It’s been a real treat to learn a bit more about you. I wish you every success with your writing!

Ol' Big Jim, has been a storekeeper, an embalmer, a hospital orderly, a medical biller, and through it all, a teller of tall tales. Many of his stories, like his first book, New Yesterdays, are set in his hometown of Piedmont, Alabama. For seven years, he lived in the oldest continuously inhabited city in the world, Amman, Jordan where he spends his time trying to visit each one of the thousands of Ammani coffee shops and scribbling in his ever-present notebook. These days, you can find him back stateside, still filling notebooks.
View all posts by Ol' Big Jim →
This entry was posted in Author Interviews and tagged author, Interview, writing. Bookmark the permalink.

5 Responses to A Visit With Eugene Tower