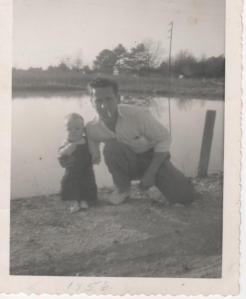 A few days ago, completely unbidden, a memory of my Dad came to me and has stuck in my mind like a rusty fish-hook. I’m not sure how old I was, but I’m thinking I was around 10-11 years old.

Before I tell you, I should remind you that I came from a tiny little town. In those days, the population was probably around 2,000 or so. And, there wasn’t much in Piedmont either. A few little grocery stores, a couple of drug stores, a movie house and some clothing shops.

There was another place though, that sticks in my mind; The Pool Hall. It had a name, just like CL Morgan’s grocery store or Watson’s Drugs did. It was called Sportland, but everyone just referred

You can just see the Sportland sign beyond the Pure Oil station.

to it as The Pool Hall, with capital letters.

All the women spoke about it in hushed tones, usually with just a hint of a frown. The Pool Hall itself was a mysterious place. It had one tiny hexagonal window, high above the sidewalk. It didn’t matter that it was high, because it was filled with frosted glass. No clues about the mysterious interior would be given away there. Clacking sounds like I’d never heard before came through the swinging door. I couldn’t begin to imagine what made a sound like that. Although I’d never been to a swimming pool, I’d seen the one down at the YMCA, and I knew nothing there made such a sound.

One day, Dad and I were alone in his car. “Riding around” is what I think we were doing that day. I don’t remember why the other boys weren’t with us, but then that’s part of what makes this memory so special.

“Boy, are you hungry?” Dad gave me one of his patented grins. I was so excited I could only nod. His question could only mean that we were having lunch in some ‘exotic’ place, like the truck stop or the Little 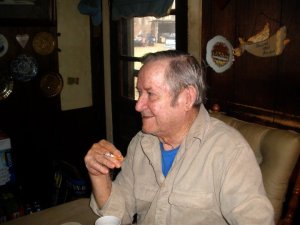 Gem Cafe. I was practically bouncing in my seat.

My eyes must’ve been as big as baseballs as Dad turned his old 1959 Ford Fairlane into the back parking lot and eased its long nose up near the back door of The Pool Hall. I was actually going into the mystical depths of The Pool Hall! My heart raced. The inside of my mouth was dry as cotton and my tongue was stuck to the roof of my mouth as I peered over the dashboard at the weather-beaten door.

The owner of the establishment, Claude Hilburn, was known far and wide for his chili. He served it every day with “soda crackers” and every man in the Piedmont area wanted his wife to have Claude’s recipe. He wasn’t about to give it up, though. Not a chance in this world!

Dad pushed through the door and we were greeted by about a dozen men of varying ages playing pool. The air was blue and thick with wafting clouds of smoke from cigarettes, cigars and a pipe or two. Several men were perched on bar stools drinking coffee and eating hamburgers or piping hot bowls of Claude’s famous chili.

Dad lifted me up to a stool as though I weighed no more than a bag of Martha White Self-Rizing flour. Within moments, Claude gave me a big smile and shoved a huge white bowl of steaming brown chili and a handful of crackers.

Between bites, I tried to follow Dad and Claude’s conversation as I looked around the pool hall taking in as many sights, sounds and smells as I could. From time to time the two men included me in the conversation by asking me questions about school, my brothers, and God only knows what else. It was hard to answer them because I was in a daze… I was in The Pool Hall! For a few brief minutes, I wasn’t a wee lad just embarking on his life’s journey. I was an equal; a man having lunch with my Dad. 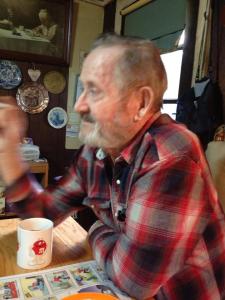 On this Father’s Day I’d like to tell my Dad how much I love and miss him. I’d also like to tell him how grateful I am to him for this and a thousand other memories. 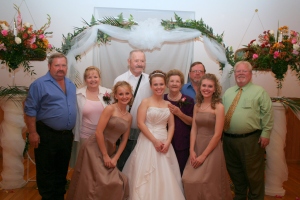 Ol' Big Jim, has been a storekeeper, an embalmer, a hospital orderly, a medical biller, and through it all, a teller of tall tales. Many of his stories, like his first book, New Yesterdays, are set in his hometown of Piedmont, Alabama. For seven years, he lived in the oldest continuously inhabited city in the world, Amman, Jordan where he spends his time trying to visit each one of the thousands of Ammani coffee shops and scribbling in his ever-present notebook. These days, you can find him back stateside, still filling notebooks.
View all posts by Ol' Big Jim →
This entry was posted in Random Musings and tagged Alabama, Dad, Family, fathers day, Home, Piedmont, random thoughts. Bookmark the permalink.

14 Responses to On Father’s Day I’m Remembering Dad, The Pool Hall, and Chili