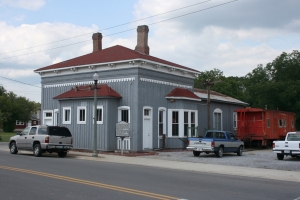 In 1870, a scant five years after the “Unpleasantries Between the States” the course of the history of Piedmont, Alabama, my hometown took a decided turn for the worse. Until a little after midnight on the 21st of July, it appeared that the little village was destined for bigger and better things.

Now, back in those days it wasn’t called Piedmont. Apparently, folks roundabout the area couldn’t reach a firm decision on a name, and as a result it was changed more often than a Southern Belle’s love interest.

Originally, the area nestled on the plains beneath Dugger Mountain was called Hollow Stump. That’s an interesting name for a village. I can hear you thinking that now. The name sprang from the fact that postal deliveries for the little settlement were left in a hollow stump down at the crossroads. Sometime after that, for reasons I haven’t been able to unearth, the name was changed to Griffen’s Creek. That brings us up to 1848 when Major Jacob Forney Dailey came down from North Carolina and, taking advantage of the Great Indian Removal, bought some land in the area.

Maj Daily apparently didn’t care for Griffen’s Creek and in light of the fact that the village was situated at the crossroads of two post roads, changed the name to Cross Plains. He managed to get an official post office with that name established in September of 1851.

By the time 1870 had rolled around, the name had mysteriously been changed to Patona. I can’t help wondering how that name came about. Patona is Spanish for “large-footed” or “club-footed”. Nevertheless, Patona was well on the way to being developed into an industrial gem. One night of ignorance and hatred changed all that while most folks in that area slept in their beds. A brawl at the railroad depot escalated to torches, white robes and the lynching of seven men.

Now, hold on a minute and let me back up a bit. An Irishman, William Luke, from Canada was hired by the Selma, Rome, and Dalton railroad to come down to Patona to teach at Talladega College. Shortly after his arrival he opened a school for black railroad workers. That school was financed by the Selma, Rome, and Dalton which later became Southern Railway.

A group of New York tycoons got off the train at Patona Station and stated their intention of locating their headquarters there. One of those financiers was none other than Franklin Hughes Delano. He was president of the railroad and his nephew went on to become our thirty-second President, Franklin Delano Roosevelt.

The railroad men saw Patona as a cheap source of labor, and Reverend Luke came along to help it happen. In less than a year, all hell broke loose. It was alleged that the good Reverend was selling pistols to the black men and the white citizens weren’t about to be putting up with that. They confronted him in the depot and a fist fight broke out. Then the shooting started. Evidently, none of the men present were “worth their powder” because when the smoke cleared, not one man was dead.

Luke and four black men were arrested and locked up in the schoolhouse. A trial started immediately and Luke confessed to his so-called crime. That ended the trial, but blood was boiling and around midnight a swarm of white-robed Ku Klux Klansmen dragged hauled Luke and his cohorts out and led them to the edge of the village where a tree and five rope nooses waited to perform their duty. They intended to make it clear to all and sundry that giving black men the idea that they deserved equal treatment and wages would not be tolerated, and Selma, Rome, and Dalton railroad be damned. Luke begged the men to allow him to write a farewell letter to the wife he left behind in Canada. He wrote:

I die tonight. It has been so determined by those who think I deserve it. God only knows I feel myself entirely innocent of the charge. I have only sought to educate the negro. I little thought when leaving you that we should thus part forever so distant from each other. But God’s will be done. He will be to you a husband better than I have been, and a father to our six little ones.  . . .

That dispensed with, the five men were sent to their destiny and they were left to twist in the warm breeze with only the stars to grieve their passing. The letter was found, slid under a splinter on a log fence.

You might think that an incident like this in a tiny Southern village would soon be forgotten. But, you’d be wrong. Somehow, the story was picked up by a newspaper down in Selma. They published a strongly slanted version of the story that was picked off the telegraph the following day by the New York Times. The headline was staggeringly biased. It read: “The War of Races in Alabama – Only a Few Negroes Shot – They were, as Usual, to Blame.”

The story claimed that there was a brawl on the train and a posse of black folk, all packing iron, were taking target practice at humble church folk. Further, the venerable New York Times reported that “Over 100 negroes” had been arrested with a “carpet-bagger named Luke, from Canada who is teaching at a negro school at this place, is under arrest as being the leader of the negroes in this murderous assault.” A bit further in the story, the gentle readers were informed that “The white people are the masters of the situation, and will hold the negroes to a strict accountability for their insane folly.”

In conclusion, the Times reported, “On Monday night, a party of armed men took them from the Sheriff and hung them by the road-side. … Luke was given time to say his prayers, and a letter was written to his wife, which was found sticking on a post near where he was hung. The bodies were still hanging at noon yesterday. Everything was reported as quiet at the Plains”.

Not to be outdone, The Philadelphia Inquirer ran the story, too. They were no kinder than the Times. “War of Races in Alabama. A Fight and what Came of it – Shooting and Hanging Negroes – Of Course the Negroes only were to Blame.”

It’s worth noting that no one was ever prosecuted for the five murders.

Franklin Delano and his group decided Patona might not be the place they wanted to headquarter their railroad after all. They took a vote and left Patona to twist in the wind as the Klansmen had done just a few nights earlier.

Things are far different, thank God, in my hometown now. I’d like to say racism and all forms of bigotry are things of the past. I reckon that’ll never be. But, I am grateful to have lived to see the Civil Rights Movement and the progress made by our black friends and neighbors. I can’t help wondering what life would be like now in Piedmont had a few black-hearted men been able to control their hatred and racism.

Ol' Big Jim, has been a storekeeper, an embalmer, a hospital orderly, a medical biller, and through it all, a teller of tall tales. Many of his stories, like his first book, New Yesterdays, are set in his hometown of Piedmont, Alabama. For seven years, he lived in the oldest continuously inhabited city in the world, Amman, Jordan where he spends his time trying to visit each one of the thousands of Ammani coffee shops and scribbling in his ever-present notebook. These days, you can find him back stateside, still filling notebooks.
View all posts by Ol' Big Jim →
This entry was posted in Random Musings and tagged Alabama, bigotry, Hatred, northeast alabama, Piedmont, random thoughts, writing. Bookmark the permalink.

You've Reached The Official Website of author Caz Greenham. "Welcome to my World of Books"