The Sad Story of Noccalula

Did I ever tell y’all the legend of Noccalula? Local readers, of course will know the tale, but those of you from far-flung places may not have heard this tragic yarn. So, sit back and listen whilst I tell you a sad story.(**Note: I have taken strong liberties with this traditional tale of Noccalula.)

Way, way back in the old days this part of the country was inhabited by the Native American people. White Europeans hadn’t yet encroached on the lands of the Principal People.

Up near what is now called Gadsden, Alabama ran the Black Creek Falls. The ninety-foot waterfall served as the backdrop for a particular Indian village. The creek provided water for cooking, bathing, and watering crops. The waters teemed with fish and crawdads to supplement their diet.

In the village lived a very beautiful young girl called Noccalula. She was tall, slender, and possessed a head of long, straight, shiny hair. It was said that her face was delicate and refined, and her dark, moist eyes were deeper than even the waterfall.

One day, a group of hunters returned to the village. Noccalula’s father, the village chief, invited them to stop to share the mid-day meal. They were tired from their hunting and happily sat with the family to eat. One of the warriors, named Oukonunuka, or White Owl, noticed Noccalula helping to prepare the meal. He couldn’t move his eyes from her exquisite face. How had he never noticed her before? Each time she passed near him, his heartbeat doubled.

Over the next few months Noccalula and White Owl became inseparable. When daily chores were finished the couple walked along the creek, laughing, talking, and falling more deeply in love. They planned their future and shared hopes and dreams.

Noccalula’s mother was not happy with the way the relationship was progressing. She wanted a better match for her daughter; a warrior with many horses from a different tribe so as to strengthen their own tribe. She had just the young man in mind, from another village up the river about a day’s ride away.

She and the Chief consulted with the distant chief and an arrangement was made. Noccalula would marry the warrior from up the river. Noccalula was devastated! She knew she could never defy her mother’s wishes. Her father, the Chief, was in agreement with her mother. There was nothing for her to do but marry the man.

On the day the marriage was to take place, Noccalula mixed with the village and guests, serving food and drinks as was the custom.

With every step her heart grew heavier. With every greeting the pain in her heart was sharper. She couldn’t bear the idea of spending her life with this strange man.

The chief summoned White Owl to talk about Noccalula and told him that the marriage would never take place because she was promised to another. He ordered White Owl to leave the village and to never return.

Looking into the deep chasm cut by the falling water, fear left her. She no longer felt the cold stone beneath her feet. The fall seemed to take forever as she felt the mist dampening her face. At last, the cold waters of Black Creek accepted her offering to true love and wrapped her in its embrace. Noccalula was no more. 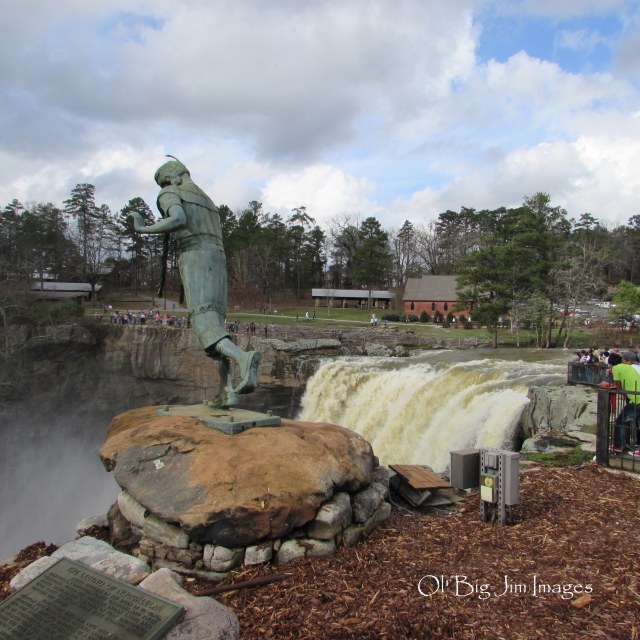 2 Responses to The Sad Story of Noccalula