I’m late! I’m late! I spent all the weekend gardening instead of writing.

Pay telephone. Telephone booth. In UK, call box. They all have a definite ring (pardon the pun) of nostalgia, don’t they? When I was (much) younger there was a pay telephone every couple of blocks. Train stations, bus stations, and airports had banks of them. We likely didn’t think about them consciously as such, but they were a comfort, weren’t they?

Lost? Got a flat tire? Ran out of gas? Just walk a bit and you could be connected to help for the cost of a thin dime. They could serve as a lifeline, or even a romance line to call your current love interest and talk away from prying ears. Additionally, and this is important, Clark Kent always had a phone booth handy to shuck his nerdy reporter’s suit and emerge as Superman. Being the odd little kid I was, I couldn’t help wondering about the suit Clark came out of. What happened to it? Did someone come and discreetly move it to the cleaners?

Phone booths in the USA were cold, sterile, utilitarian things. They were constructed with aluminum and had lots of glass with red or blue skirting at the bottom. We relied on their presence and didn’t really give a tinker’s damn their aesthetics.

When I was in high school, there was a telephone booth in the main hallway, near the entrance. It looked a bit like this one. I always loved the idea that it had a place to sit whilst spinning the heavy metal dial to be connected with someone distant, but necessary, at that moment.

The 70s rolled around and many of our telephone booths were replaced with these monstrosities. There was no door to shut out the rest of the world, nor was there any protection from the elements. And, what about Superman? How in tarnation was Clark going to get changed in this abomination?

Ostensibly, the design was to allow handicapped people access to the phone. More likely, they cost less to make and so allowed the phone company to pocket more cash. Whatever the reason, I only ever used this one if it was an actual, verifiable emergency.

Nowadays, it’s damned difficult to find a telephone booth. I honestly can’t remember the last time I saw one.

If we go across to Rightpondia and visit United Kingdom we’d see call boxes that are works of art by comparison. The iconic red call box (or kiosk in local parlance), representative of the power and glory of the British Empire, can still be seen pretty much every place that Britain made her mark.

Many of these old call boxes are being removed and replaced. However, thanks to a public outcry, the enduring symbols of London (and elsewhere) are making a comeback. They’re being repurposed as ATMs, free little libraries, tiny coffee shops, cell phone repair stands, and information booths to name a few. In some places in rural England they’ve been set up with defibrillators because medical help can take awhile to arrive. The refurbished kiosks can now be seen in such high-traffic areas as Trafalgar Square, Piccadilly Circus, and Olympic Park. 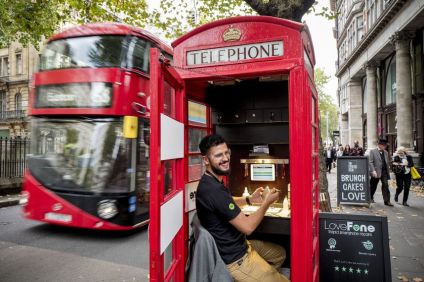 If you’d like a call box of your very own, you can have it from around £3750 and up. That will give you the base to create an ice cream stand, an espresso shack, or even a souvenir shop.

It’s really nice to know that the call boxes, or phone booths, or whatever you may prefer to call them, aren’t disappearing forever. I’ve found a similar phone booth on this side of the pond. It’s in Yellow Springs, Ohio and is now being used as a tiny art gallery. Other than that one, I haven’t found many in the US. I wonder if they’re all lined up like soldiers in some phone booth graveyard somewhere, waiting for a new lease on life?

Thank you a hundred thousand times for coming round today! I appreciate your visits, your likes, and your comments. This is the spot where I do my shameless plug for New Yesterdays. You know, and I know that you want a copy. Click the book’s title and be whisked away to Amazon where you can get yours. Got young teenagers, young adults, or other readers in your family? Why not pick up copies for them, too? Thank you so very, very much, and I’ll see you Wednesday.