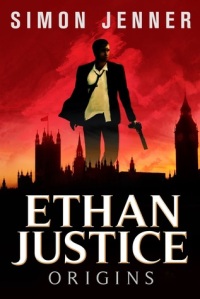 About the book: “Waking up beside the gorgeous Savannah Jones, John is shocked to learn she was for hire, and he can’t pay the price – a thousand pounds or broken legs. In desperation, he turns to best friend, Mark, for the money. Only one problem – Mark has a dagger in his back.

John and Savannah are plunged into a dangerous world where wits and adrenaline are their only weapons and trust in each other their only certainty. As the body count mounts, they discover Mark wasn’t the person John thought, and his terrifying invention may well end up killing thousands, John and Savannah included.

A race to recover the missing invention pits the unlikely pairing against ex-SAS psychopath, Gregory Fisher, a man who will stop at nothing and kill anyone in his way to wreak revenge against the Government who stole his livelihood.

When Smith and Jones team up, the result is explosive.

Ethan Justice: Origins is a fast-paced, action-packed, character-driven thriller, guaranteed to make you laugh out loud, cringe, cry and cheer.”

The opening sequence hooked me. The very first sentence promised a great deal of well described action. That promise was not only fulfilled, but exceeded in a grand way!

I was very pleasantly reminded of the old noir tales. Action, drama, and romance well seasoned with sarcastic humor built to a well-delivered crescendo that was very satisfying. The leading characters, John Smith and Savannah Jones, develop beautifully, exhibiting unexpected strength and tenacity.

Periodically, throughout the book, Jenner switches to first person with the antagonist. I wouldn’t have expected it, but it was astonishingly well done and I think we knew the antagonist far better because of the unique presentation. He is, without doubt, one of the darkest characters I’ve ever read. To coin a phrase, “He’s too twisted for color TV!”

Ethan Justice: Origins so absorbed me that I neglected everything else in favor of reading!

I recommend this book most highly and rate it five stars.

One word of caution, quoting the author: “This book contains a few violent scenes, a dash of sex and the odd bit of bad language, so please don’t buy it if you are easily offended.”

About the author: “Simon Jenner is a man whose goal in life is to discover his goal in life. He lives with his wife, who keeps his dream alive and his stomach tight against his trousers; his son, a dreamer just like his dad; and a dog who receives fuss like he’s the one doing the favour.”

You can find Simon Jenner at:

Disclosure: I received a complimentary copy from the author in exchange for an unbiased review.

Ol' Big Jim, has been a storekeeper, an embalmer, a hospital orderly, a medical biller, and through it all, a teller of tall tales. Many of his stories, like his first book, New Yesterdays, are set in his hometown of Piedmont, Alabama. For seven years, he lived in the oldest continuously inhabited city in the world, Amman, Jordan where he spends his time trying to visit each one of the thousands of Ammani coffee shops and scribbling in his ever-present notebook. These days, you can find him back stateside, still filling notebooks.
View all posts by Ol' Big Jim →
This entry was posted in Book Reviews and tagged author, book, Facebook, Fiction, Goodreads, my opinion, reviews, Twitter. Bookmark the permalink.

1 Response to Fasten Your Seatbelts Readers, “Ethan Justice: Origins” Is One Helluva Ride!

~~ Children's Books Set on The English Riviera ~~ Buy on Amazon ~