The days are winding down. In just over a month I’ll bid farewell to Jordan, “The Other Holy Land” and head back home to Alabama. There are a great many things I’m looking forward to when I reach home soil. We’ll talk about those in another post, okay? Today I’m thinking about the things I’ll be leaving behind. Things I’ll miss and probably be wishing for at some point in the future.

At the top of the list would have to be the new friends I’ve made during the past five and a half years. Friendships I hope will last always, but realistically I know that rarely happens. Ayoub is first. He’s Zeek’s brother and has become a de facto brother to me. No matter the time or day or circumstance, he’s ready to come to me and help with anything I need. He’s also a frequent guest in our flat, “Just to keep you company, Mr Wright”.

Certainly, I’ll miss the preferential treatment I receive nearly everywhere I go. As an “other”, a foreigner, people here are anxious to help me and talk to me. Random strangers approach me in the streets, greet me and want to spend time chatting over a cup of thick, strong Turkish coffee. I’ve heard more stories than I’ll ever be able to remember from strangers as we sipped and chatted. I love the good-natured laughter and broad smiles when I speak Arabic in an American Southern accent. I enjoy the ribbing I get when I use the wrong word and completely change the context of the sentence.

Bakeries serving bread fresh from the oven, butchers who will happily provide you with any cut you want, and the thousands of street-side coffee vendors who bring the cups right to the car are all things that simply don’t exist back home. I will miss seeing the fellows standing at the edge of traffic, waving their trays to entice customers to sample their coffee or tea. 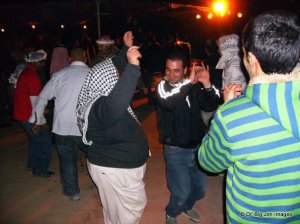 And, I can’t think of leaving Jordan without thinking of the many beautiful historical sites that dot the landscape. Jerash, “The Pompeii of the East”, the most beautifully preserved Roman Decapolis city in the world has been a favorite for years. The ruined city of Umm Qais, and the site where Jesus supposedly cast the demons into the pigs who then ran down and drowned in the Sea of Galilee (Lake Tiberius), the Dead Sea, Petra, and Wadi Rum make the list, too.

Camping in Wadi Rum is very nearly a spiritual experience for me. Lying on my back, staring at the brazillions of stars as the desert night wind gently blows over me is something I can never forget. 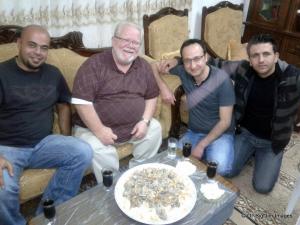 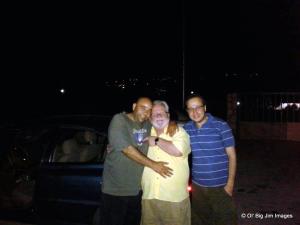 The Hashemite Kingdom of Jordan and her people have been magnificent hosts, making me feel like family, like I belonged, like an old friend. As we begin a new chapter in life, I’m excited by the possibilities. I’m also feeling an ache in my heart for everyone and everything I’ll be leaving behind.

Ol' Big Jim, has been a storekeeper, an embalmer, a hospital orderly, a medical biller, and through it all, a teller of tall tales. Many of his stories, like his first book, New Yesterdays, are set in his hometown of Piedmont, Alabama. For seven years, he lived in the oldest continuously inhabited city in the world, Amman, Jordan where he spends his time trying to visit each one of the thousands of Ammani coffee shops and scribbling in his ever-present notebook. These days, you can find him back stateside, still filling notebooks.
View all posts by Ol' Big Jim →
This entry was posted in Memories, Random Musings and tagged Friends, Jordan, Memories, random thoughts. Bookmark the permalink.