Today Zeek asked me to make some bread. That’s a rather unusual request from him and something I really enjoy doing, so I decided to give it a go.

I gathered everything I’d be needing and set to it. I started out with 3 cups of all-purpose flour, ¼ teaspoon of yeast, and a teaspoon of salt.

After mixing all the dry ingredients I added some quite hot water and began to stir. 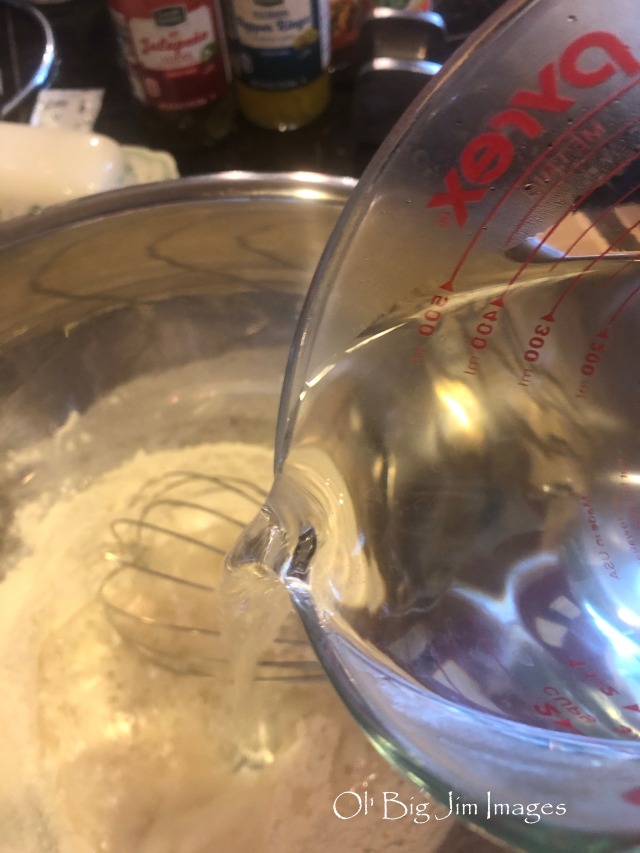 This process makes a rather moist, shaggy dough. That’s as it should be, so if you’re cooking along with me don’t worry.

After shaping the ball I covered the bowl with shrink film and left it to rise for three hours. It didn’t quite double, but it was close.

Next, I turned it out onto a well-floured surface and shaped it again. This dough doesn’t require kneading! Look at the lovely holes created by the yeast!

At this point I put the dough onto parchment paper and into a bowl and covered it with a tea towel.

Now, I had to turn my attention to getting ready to cook! I took the Dutch oven and put it into the oven and set the gas to 450°F and waited for it to reach temperature.

When the stove was fully heated I lifted the dough ball, with the parchment paper, into the hot Dutch oven and shoved it inside to bake for half an hour.

After thirty minutes I took it out, removed the lid and the parchment paper and put it back inside to bake for another fifteen minutes.

Just look at that loaf! Beautifully done, crisp crust, and a nice hollow sound when I thumped it.

Oh, and yes, it’s just as tasty as can be! Go ahead, give this bread a try. It’s as easy as falling off a log. You’ll be glad you did!

Thanks for stopping by today! Since you’re surfing the ‘net anyway and you’re clearly a reader, why not pop over to Amazon and get a copy of New Yesterdays for your reading pleasure? Pick up extra copies for the young folk in your life. They’ll thank you for it and Ol’ Big Jim will too! Just click either of those highlighted links and, like magic, you’ll be off on a delightful adventure!

7 Responses to Adventures in Bread-making